Steve Conte is known from the New York Dolls, Crown Jewels, the Contes, the Crazy Truth and of course the Willy DeVille band. He played guitar for and with a lot of pro artists. But above all Steve Conte is who he is! The album - Steve Conte & The Crazy Truth - was released last year on Varese Vintage Records. Steve Lillywhite, producer of U2, Rolling Stones, Johnny Thunders, XTC and more, said about it: "There is very little genuine rock and roll out there at the moment - but Steve Conte has hit the nail on the head with this one!" And Amazon.com/UK wrote: "If there ever was a rock and roll guitar album that could kick start a sense of rock and roll adrenalin in the tradition of Lou Reed, Johnny Thunders, Mink DeVille and Television, it has to be Steve Conte and the Crazy Truth." New York native but also a little bit Dutchman Conte was kind enough to answer our questions. “Dank je wel...”

Steve, are you born and raised in New York City?

SC: I was born in New Hartford, NY… 4 hours northwest from NYC. I spent my school years in New Jersey and afterwards moved to NYC where I’ve been living for over 20 years now.

Was 'Company of Wolves' your first professional band? And how did you become involved with the New York Dolls?

SC: It wasn’t my first pro band ... I had played guitar for other pro artists like Jill Jones of Prince’s band (I was also her musical director) Glen Burtnick, Delmar Brown & Bushrock, Blood Sweat & Tears ... The Wolves was just the first band in which I was a founding member/songwriter and signed to a record label with.

When David Johansen got the call from Morrissey to put the Dolls back together he asked around the musician community in NYC for names of guitar players to take over for Johnny Thunders. Every person he asked told him the same thing – “Call Conte!” 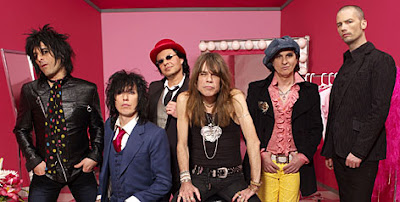 You recorded The Byrds' hit-single Turn! Turn! Turn! What sixties and seventies artists have inspired you?

You toured in the UK with your The Crazy Truth and planning tour dates for Scandinavia early 2011. Do you have plans of playing the Netherlands and Belgium as well?

SC: I played both the Netherlands and Belgium last year with The Crazy Truth – and yes, I am planning on it for early 2011.

That's great news! The last Crazy Truth album contains many catchy songs, do you write and compose everything yourself?

SC: Yes, I do. The band “arranged” the songs together before recording but those are my lyrics, melodies and chord progressions.

How was it working with David Johansen (New York Dolls) again?

SC: It was a blast. We’ve written some great songs together. David Jo is a real character ... they don’t make ‘em like that any more. He was there in NYC before there was a music scene and helped create one.

'Gypsy Cab' is my favourite song of that album, it does have some Lenny Kravitz in it. 'The Goods Are Odd' is an old-school Dolls-style song and 'Busload Of Hope' could have been a DeVille song! Does it bother you when people compare your music with other music?

SC: Only when they compare me to Lenny Kravitz! Haha. I don’t mind the Willy comparison as he was one of my faves but also I think Willy & I liked a lot of the same kind of music; old blues, prison songs, R&B, soul, jazz, 50s/60s classic American songwriting a la Brill building, etc. [edit: http://www.history-of-rock.com/brill_building.htm]

I heard songs of you like 'The Garden of Everything' and 'Words That We Couldn't Say'. This work is quite different to what we expect from you, I even had to think of Stevie Wonder. Why this turnaround at that time?

SC: The songs done for Japanese soundtracks are not my songs, the composers hired me to sing their songs. I did my best to make them sound like they wanted to hear them sung. If they wanted more Stevie or more Sting I just found that place in my voice. I have many different vocal sounds … ya know I was Paul Simon’s singer at rehearsals which I bet you’d never guess by listening to my own albums!

That is surprising indeed ;)
I understand that as long as it's no mechanical dance noise you dig a lot of music?

SC: Yeah, a lot. Right now I’m on a pop & garage rock kick, Guided By Voices, XTC, Nick Lowe, Paul Westerberg. Adam Ant, The Kinks, Sparks, When I get into something I go all the way. When I was into Flamenco I got 70 albums, and then over 100 old school dub reggae albums ...

What is the difference between creating soundtracks and writing rock songs?

SC: I have added my existing songs to soundtracks and even written songs specifically for films, but I never “scored” anything. I have never actually created a soundtrack, though I would love to. If a filmmaker wants to hire me I’d be happy to create a soundtrack. There is info about my film placements & contact info on my websites:
http://thecontes.com/filmandtv.asp * http://www.steveconteandthecrazytruth.com

You worked with artists such as Peter Wolf, Maceo Parker, Phoebe Snow, Billy Squier, Suzi Quatro, Jill Jones, Chuck Berry, Simon & Garfunkel, Eric Burdon & The Animals, of course Willy DeVille and many others. Have you never felt the need to be a constant companion or are you a real front man?

SC: Well, I don’t know what you mean by a “real front man” ... I mean every man is different. I’ve known some front men who are no different than me and then some who are completely different. Here’s the thing, I am an artist; I write songs, sing, play guitar, make records and perform live. But I also love to just get in the backseat and let someone else drive. Then I can just play my guitar without all the bandleader/frontman/ business pressure on me. So whatever that makes me, that’s what I am.

I understand you provides all the bass(!) tracks on Southside Johnny & the Asbury Jukes' album 'Pills & Ammo'. How did this collaboration come about?

SC: No, that’s my brother John … he’s the bass playing Conte brother. Oddly enough I have played w/ Southside a few times, he’s a real musical guy and performer. He invited me to a Jukes show and got me up on stage to sing lead on a couple of songs. Bizarre ... but I loved it!

But you are playing the bass as well, do you also play any other instruments?

How is your brother John doing, do you still Bleed Together? (title of The Contes album 2003) 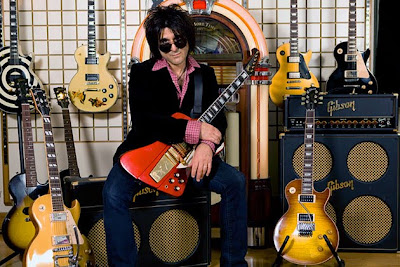 Do you have favourite guitarists? And how many guitars do you own yourself right now, would you tell us something about your gear?

I have about 30 guitars, a lot of Gibsons (I’m a Gibson artist) but also Fenders, Danelectro, Martin, Guild, Airline, etc. I prefer old guitars and amps “with a vibe” to them. I have an old Marshall plexi, Vox AC30, Fender & Ampeg amps. I have a bunch of pedals & weird toys too ... so many to even start naming ...

When and were did you toured with Willy DeVille and did you also record with the band?

SC: I played on Willy’s summer 2003 tour when Freddie Koella left to play with Bob Dylan. We started in Switzerland in June and went through Italy, Austria, Germany, Holland, Belgium & France. I’ve recently discovered bootleg recordings from these shows through your website but I never went into the studio with Willy.

Which musicians have you played with in Willy's band?

SC: I had known Dave Keyes the bass player for many years. Everyone else I met at the rehearsals. 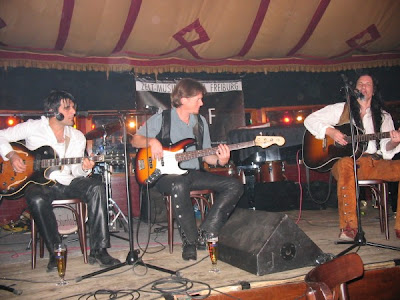 [Steve, David and Willy at an aftershow jam in Freiburg Germany 2003]

The cooperation with Willy will always remain a special memory for you because you have met your wife during a gig in the Netherlands (Vlissingen). Were you previously been in the Netherlands until that moment and what did you think of our country?

SC: My tour with Willy was my first time in the Netherlands. I loved it right away. The canals, architecture, the “relaxed” laws, etc.

The night Willy died you also did a gig with friends in Vlissingen (De Pantha Rei).
Even though you knew he was sick, how was that emotionally?

SC: It was of course very sad. I had always hoped to get to play with Willy again but more than that, I just wanted to hear him keep making records and performing.

What is your favourite song or album of Willy ‘Mink’ DeVille?

SC: I have different ones ... at the moment it’s either Cadillac Moon or Empty Heart ... then there’s always Venus of Avenue D ... or Something Beautiful Dying. 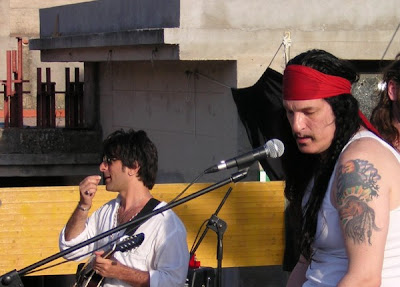 [Steve and Willy soundchecking before a gig in Sardinia Italy 2003]

I myself have roots in Vlissingen also. Have you ever eaten the local products such as syrup bread (bolus), buttercandy (Zeeuwse boterbabbelaars) or mussels (mosselen)?

SC: No bolus but Olie Bollen, sure ... mussels & oysters too!

What is the biggest difference between The Netherlands and NYC?

SC: Both beautiful in their own unique ways. Probably the biggest difference is that you can get anything you want 24/7 in NYC and in Holland most places close by 6pm and are not even open Sundays.

What was the first Dutch word or phrase you learned?

I have read that Tina Turner was your first crush. You still want something to do with her?
I mean ... sing (or record)!

An interview with you seems superfluous because there is so much information about you available on the Internet. You're quite interested in new media like iPhone, Facebook, Twitter and Spring Form. What do you find so attractive about it?

SC: It’s great that people can be connected by these things. It’s a whole new world. In the 70s you could never dream of writing a note to one of your heroes and having them write back. The time of that “mysterious image” is over … people want to know the musicians. There’s an oversaturation of bands so the one thing that makes you stand out is who YOU are.

Are you a family man? I mean do you see your brothers John and Jeff, sister Jennifer and your mother Rosemary regularly?

Do you and your wife Hadda raise your kid Zia bilingually?

[the Conte family in the early days; with Willy; with brother John; with his wife Hadda]

- This is a standard question in all our interviews: nowadays there are many digitalized recordings of independent origin (bootlegs) in circulation among the fans on the internet. What's your opinion about that?

SC: Bootlegs are fine by me. If someone likes your music enough to record your show then trade it and talk about with other fans, that’s a great problem to have.

- Finally, do you want to say anything else to our readers?

SC: Thanks for reading and I look forward to the next time I can be involved in playing Willy’s music like we did in NYC. It was beautiful. I hope to see some of you out there on the road this year! (I’m touring with my band Steve Conte & The Crazy Truth and also with Finnish singer Michael Monroe from Hanoi Rocks)

I certainly hope to attend one of your gigs and I'm sure many DeVille fans will be present. Thank you very much for answering these questions Steve and we hope to see you soon on stage somewhere somehow. Mink-On! 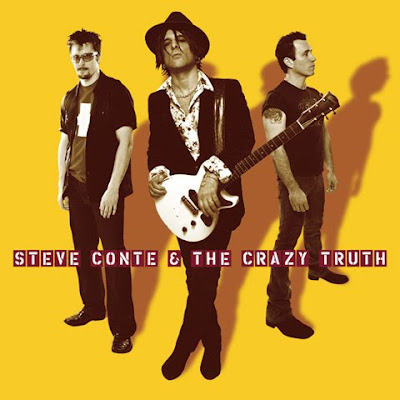 TO GET THE RECORD:
In the Americas -
http://www.amazon.com/Steve-Conte-Crazy-Truth/dp/B002NACY5O