Joe Vasta jr is known from Mink DeVille, played Bass on the albums Coup De Grâce 1981 and Where Angels Fear To Tread 1983 and he can be seen on the Montreux 1982 DVD and a lot of YouTube movies on the net, like Pinkpop The Netherlands and Werchter Belgium 1982. Raised and living in New York he speaks to us about his time in Mink DeVille, his family and buddy Thommy Price, his equipment, the dental business, working with others, life in NYC and much more. 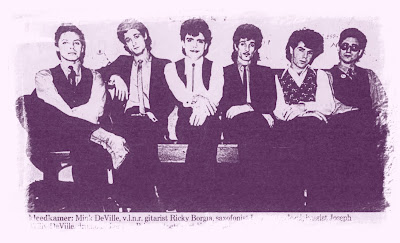 Hey Joe, how are you doing?

Joe: Hi there my friend, I'm fine. I see you have a lot of questions, cool! I have to fix some bass parts on the Mink DeVille party show from BB Kings in a moment. But let's start and if I have to go, I will get back to you on this later, okay?

No problem man, anyway we from WDIF are honored and privileged to interview you! How can you be called: Joe Vasta, Joey Vasta or Joseph Vasta jr?

Joe: I would like to be called Joe Vasta jr.

Then we do so during this "conversation" ;-) You are the son of the legendary musician Joseph Vasta sr. Where do we know your father from?

Joe Vasta jr: Well my father was a trained trumpet player from a very young age. He played with Dizzy Gillespie back in the fifties! He also had his own Big Band with seven members to play with in those days. He also had his own music store for five years and he was always into cars! We loved cars! I loved sports cars too growing up as a kid. There is so much to say about my dad. I guess guys that make music are good at anything, right? He fought in Germany in World War II for four years. Played there too and made a record in Brussels! Can you believe that? And I still have that vinyl thing, very old!!

Are your parents still alive and do you see them regularly?

Joe Vasta jr: My father died in 1982. The second Mink DeVille record has his name on the back at the bottom, to honor my dad. He was the hardest working guy I know, I will always miss him... thanks for asking. It's just my mom and me now. I take care of my mother, she knows everything I do when it comes to music. She knows Thommas Price (drummer) for years, that's because we grew up together. Playing and wishing all these years as kids to make it some day. You tell me if we did?

Well, at least you both played in Mink DeVille, In that sense you have certainly achieved success! Are there more musicians in the Vasta family?

Joe Vasta jr: Not anymore, I had a brother and a sister too. My brother played guitar before the drugs got to him, he died in 1984. He was a Hendrix nut and played like him too! My sister died just two years ago of cancer. Cancer sucks!!

Do you write songs yourself and do you play any other instruments?

Joe Vasta jr: Yes I do write songs and play some instruments too. I arange a lot and puts it all together you might say.

Do you have a favorite bass-guitar and how many guitars do you own right now, would you tell us something about your gear?

Joe Vasta jr: I started off with a Japanese bass when I was a kid. Then I got a Hofner Bass, then a Gibson EB3 electric bass guitar ... then a Rickenbacker Guitar or Ric Bass, a nice bass! But I always had my "P-bass" (Fender Precision Bass) around for years and that's what I play now. But the old ones in stock are all vintage basses. I have a '66 P-bass that's my main bass guitar, you can see it on the BB Kings show. I have a ton of basses that I just sold off ... had way to many, 67 guitars at one time is way to many to care for!

Before you joined Mink DeVille, Thommy Price and you played among others but with a lot of other musicians on Ronnie Spectors' album Siren (1980). Were you both session musicians at that time?

Joe Vasta jr: Yes, Thommy and me were the hit of New York City. We played on everything we could get our hands on! And we are playing together again. With our own songs, it's coming out next year but I can't say too much about it right now because Thommy is on tour with Joan Jett's Blackhearts at the moment. But I will let you know when, okay?

You've recorded the albums Coup de Grâce 1981 and Where Angels Fear to Tread 1983 with Mink DeVille, and we can see you on the Montreux 1982 dvd. When and how long was you a band member and on tour with Mink DeVille?

Joe Vasta jr: I played with Willy for five years, then on and off again. Because there often was no money for the band. I had to make a living too you know. Where the money we earned with Mink DeVille did go? I don't know! Willy always got some money but what he did with it, who knows? A lot of it went up his arm at that time I suppose. But he took control when Nina came into his life! She is a great person man, she looked out for Willy up until he died, that's for sure. A great woman I must say!

Which Mink DeVille song you play the bass on appeals to you the most and why?

Joe Vasta jr: You know ... almost everything I played with Willy I loved. You need to reach down and find what it takes to make every song happen. That takes practise and the love for music to make a great band. We had all of that back then, nowadays you can hear and see (cd's/ dvd's) how good the band was! Compare it to the later bands and you decide?! In fact all the other Mink guys where good!! But never had the time to become realy GREAT! We just did I feel, that's all.

Yes I agree, the late seventies and early eighties were my favorite Mink times as a fan too! I have often seen your gigs in the Netherlands and Belgium in the early days. Great and exciting times.

After the Mink DeVille era you went on tour with Billy Idol and with ex-Babys’ member John Waite from 1983, did you also record with them?

Joe Vasta jr: Oh yes!! I toured with Billy and his band and I was going to be on the 'Rebel Yell' album. But went with Willy to make the Angels (Where Angels Fear To Tread) album in 1983. And I did record with John Waite too and toured with him. Whow, worked also with so many others, too much to say right now ... [Billy Idol video]

Joe Vasta jr: Well ... John was a great gig to do! Franky the drummer got me in this band realy. We played together for a year or so, made a record and played a lot. We had great people with us on this tour. But there are always other things better you know. It all depends on your life; are you happy where you are? who are you playing with? is the gig at home in NYC, you know that kind of things.

After that, we haven't seen you for a long time, what have you done all this time?

Joe Vasta jr: I have my own business now, dental lab work. I am a gold man ;-) I do bridge work, only the gold part of it. And I dropped out of the music scene for a while. I started playing again in 1995.

Joe is currently interrupted the conversation here: Listen I have to go now but I will come back later on today ... or "maybe tomorrow" ... like the song goes ;-) I will get back to finish you up, okay?

No problem, it's your precious time and more important things first. 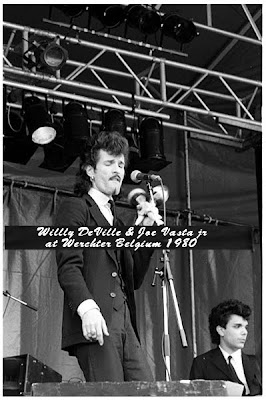 Posted by Willy DeVille International Fans at 11:20 AM