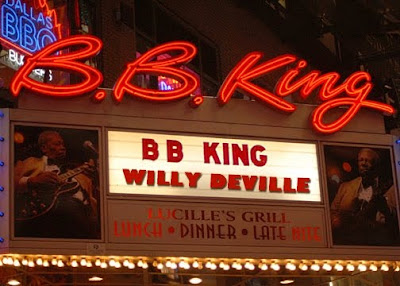 Special Guests: Peter Wolf (J Geil's Band), Richard Lloyd (Television), Steve Conte (DeVille Band '03/New York Dolls/The Crazy Truth). Freddy Koella (who had other liabilities this memorial day, went to join Bob Dylan for a couple tours in '03/04 so Steve replaced him). And of course his last wife Nina (who got the flowers handed). All the musicians joined the encore at 'Spanish Stroll'.

Thanks to initiator of the Wdv B-day celeb. show ánd bassplayer David J. Keys (who had to leave the band due to cancer diagnosis at fall 2006. But Willy and Dave worked together at Willy's place on the album Pistola despite the heavy treatments, he's a real surviver!
Thanks Dave). 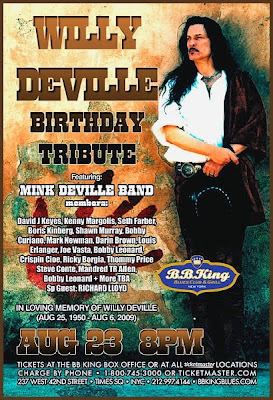 Cyn-Dee [visitor]: "It was the bomb last night! Mingia muerta.. went off the hook! They were all there: former Mink DeVille amici Bobby, Ricky, Kenny, Tommy, Seth, Shawn, Dave, Mark, Boris, Darin, Louis, Joe Vasta, Crispin Cioe, Steve Conte and many many more... a coterie of talented guests and surprises (Peter Wolf!) celebrating the DeVille legacy at B.B.Kings joint! The ruff went off! I've got such a woo-lee (W!lly) for a calzone!!"

Anonymous said... "A great night! Came up from Baltimore for the tribute and had so much fun---and shed a few tears along the way. We miss Willy! But what a wonderful tribute for a sensational artist."

To DeVille Soc. Network: "It really was a great night to play. Only hope that Willy heard us I miss this man. You should only know the guys played there heart out last night. Sounded freakin' great! Every one who took part played very well. Did you know that it was recorded and filmed too? Soon to be put out, as far as I know. Mink might be back, keep your fingers crossed okay. I think for a band that only played twice in the last week we did fine! I will put up some pictures from backstage for you when I get the time. Playing around takes up so much time you know. But we all were very glad the turnout we had. We might be doing this again with a smaller band, key guys from Mink DeVille with Peter Wolf singing for the frontman! Let's see what happens, hang in there okay?! I will let you know from time to time to let you in what's going on. Till then, peace out world and all you Minkers out there. Love to you. Joey V. jr."

To DeVille Fans: "Hi there Gillespy, that's right! I also played with Billy Idol too. I didn't do the album at the time, I did Willy's album instead. No I was not at the lowlands gig. We are making a new record now with Thommy Price, his own record, look for it soon. We are still working on it in New York City. It will be done most likely by the end of the year, but what I could do is send you a song off the album if Thommy agrees with that. So you could hear what we are doing, okay? I will let you know when it is a good time or when we get back recording it. Thommy Price is out with Joan Jets' Black Hearts right now in Canada. Thanks hun, talk later okay have to go tonight, see you tomorow. Joey V. jr. Mink-on!!" 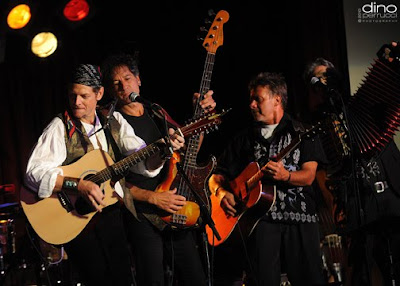 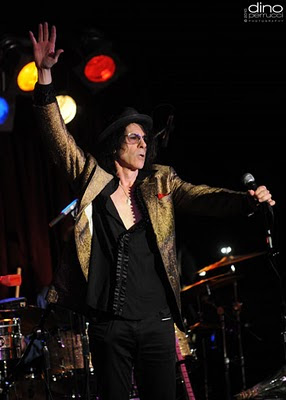 I had one reason and one reason only to go to the Willy DeVille Birthday Celebration held at BB King's in Times Square this past Monday night (only two nights from what would have been the legendary singer-songwriter's 60th birthday): I wanted to see the original Mink DeVille back together and I wanted to see them jam with some of Willy's later sidemen. I actually lost track of Willy and the boys after I interviewed them backstage at the Capitol Theater in Passaic, NJ in Spring 1978 (and had actually hung out with the band sans Willy circa Summer 1977 in Franklin Lakes...their manager's mom was friends with my mom in Franklin Lakes, NJ, now made famous as the setting for Real Housewives Of New Jersey). The original band seemed to get unceremoniously dumped while in LA to record the third Mink DeVille album (rumor has it the producer was at fault) and as purveyors of the punk scene will tell you, they were phenomenally talented but kept it more raw and pure rock 'n' roll than Willy's later ensembles. I thought bassist Ruben Siguenza was an especially down-to-earth person and I remember his wallet disappearing from the Capitol Theater dressing room and when I talked to him after the BB King show on Monday night, he didn't seem to remember this. But that was my main memory from that night other than Willy's gold tooth and his wife Toots' piercings (I had never seen either of those things before, to be perfectly honest). As for Monday night's show, put together by DeVille's multi-instrumental sidekick David Keyes, it provided some great blasts from the past and to see the original Mink DeVille group do "Gunslinger" (with a few of Willie's later partners in crime nearby) was a very special moment, possibly not ever to be repeated. Special guests included "mad scientist" axeman Richard Lloyd of Television fame (who played with Willy on several occasions), guitar slayer Steve Conte who did extensive touring with Willy and J. Geils crazyman howler Peter Wolf (who was basically just a Willy uber-fan). Original Mink DeVille axeman Louie X. Erlanger (who recently brought his bandmates back together for a phone-in conference on his radio show to discuss the old days), probably summed up Willy best by saying, "I admired Willy because he always stuck to his guns" before he and the rest of the "old Minks" performed (appropriately enough) "Gunslinger" from the Cabretta album. The encore featured "Spanish Stroll," probably one of DeVille's Top Five most famous songs and it was touching to see so many talented people together who had played behind this misunderstood and tragic musical genius (about 25 great musicians seemed to be enjoying themselves immensely as they fought for just enough space to play on the small BB King's stage). Willy DeVille said he never would be fully appreciated until after he was gone, and this crowd's reaction to this show might just be an omen of things to come in terms of Willy reaching "legend" status (many die-hard fans are circulating petitions online to get him nominated for the Rock And Roll Hall Of Fame as well).
THE MAC WIRE RATING: 4.5 OUT OF FIVE STARS. 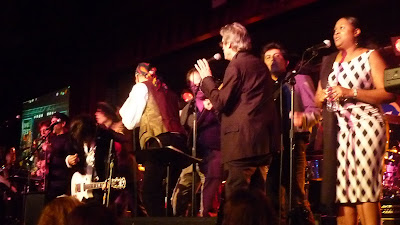 The splashy encore of "Spanish Stroll" undoubtedly had enough "savoir faire" to have Willy smiling from the rock and roll heavens above [photo: Anne Raso] Watch video