One of the most exciting and energetic Toronto-based Canadian musicians ... past, present and future. Paul James is a real musician's, musician. He is constantly surrounded by the worlds stage as big time players such as Mink De Ville (Montreux, Pinkpop, Werchter 1982!), Bo Diddley, Bob Dylan, John Hammond, Spencer Davis, Lightnin' Hopkins, Jack Scott and Sunnyland Slim, to mention a few. [biography]


An original song preformed by the Paul James Band at Paul's birthday bash in january 09. This is the title track from their newest c.d. Lost in the Blues. This cd can be purchased at www.pauljamesband.com. For more information about upcoming dates visit pauljamesband.com or add paul on facebook. Words and Music by Paul James Vigna. Mar Sol Publishing.


Spanish Stroll, Paul in Mink DeVille at Montreux in 1982

Paul James' reaction on the Pinkpop '82 Mink DeVille - Lipstick Traces vid by Aggie >
pauljamesband: Real Rock & Roll!﻿ I played guitar with Willy on this show. I sure do miss Willy and Toots. They were something else! It's really great to see this after all these years. Thanks so much Agnes for posting.Willy DeVille,(guitar & Vocal),Paul James (guitar),Kenny Margolis(keys),Tommy Price (Drums),Louis Cortelezzi(sax),Joey Vasta(bass).﻿ Holland 1982.

More great vids of Paul James and his band at www.pauljamesband.com 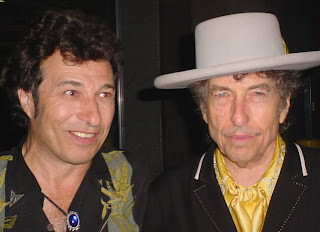 I am still performing and writing and leading my own band. I live in Toronto, Canada, The rehearsal for the show at BB Kings was a week before the show. I would have had to fly to New York and get accommodations for a week to do it and cancel some shows that I had with the Paul James Band. There was no budget and too expensive. I would have loved to be there. If I lived in New York I would have been there for sure...

I first heard Mink DeVille in 1977. They came out of the 'New Wave' and punk scene from NYC. I thought most of the punk bands had lots of attitude but were not very good musically. Mink DeVille stood out to me. I thought they were the best band to come out of New York at that time. I even started playing' Cadillac Walk 'and 'She's so Though' with my own band. I saw the Mink DeVille band the first time they came to Toronto and thought they were great live... They played a club called 'The Edge'. I just watched the show, I did not meet Willy or Toots.. yet.. I met Willy and Toots in Toronto. They called me and asked me to come to their hotel room after Willy's show at the El Mocambo in 1982 and bring a guitar. I think a lot of people told them about me and that they might like me musically. I was playing that night with my own band so I could not go to his show, however, I went to the hotel Willy & Toots were staying at and brought my acoustic guitar, harmonica rack, and slide. I played and sang some old blues songs, and slide guitar for them and we passed the guitar back and forth and talked about music all night. When I was leaving, Willy said if he ever needed a guitar player he would call me.

About two months after that, I got a call from him. He wanted me to come to New York City as soon as possible. He wanted me to play guitar on a recording session of the song "Stand By Me", at the 'Power Station', recording studio in NYC. Then I was to rehearse with the band a few times and go on tour for two months, playing in eleven counties in Europe.
I bought a plane ticket for New York. Toots and Willy had an apartment on 5th Avenue in Manhattan, near Greenwich Village. I stayed with them for three weeks sleeping on the a couch in the living room. I learned all the Mink DeVille songs that we were going to play on the tour. On the recording session, I played two guitar parts. There is a tremolo guitar that matches the bass line and I chorded and strummed a nylon string guitar Mexican style for "Stand By Me". Willy took me with him when he did the lead vocal track, and a couple more times when the 'Soul Inspirations', added the backup vocals, and when percussion and strings were added. It was very interesting to watch him work. We hung out together, went to Movies, and clubs and into the village every night because we were right within walking distance. Willy and Toots didn't have a television at that time!

Like Willy I write songs, play guitar, sing, and I am an entertainer. I am not really a sideman like most of the great musicians of Willy's bands. However, I would never turn down an opportunity to back up such talented people as Willy DeVille, Bo Diddley, John Hammond, Lightning Hopkins, Sunnyland Slim, or Bob Dylan. I learned to be a better writer, singer, musician, and entertainer, by playing with them. Just as Willy became a better writer after working with Doc Pomus and Jack Nitzsche. 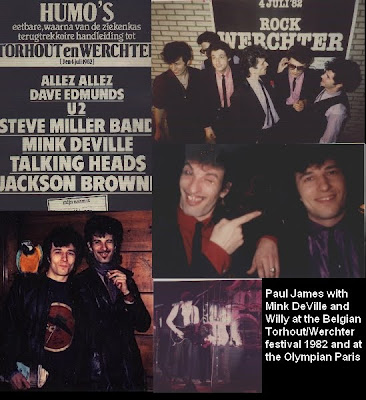 I lived with Toots and Willy for three weeks in New York and we were very close for the two month tour of Europe. After it was over I went back to Toronto and recorded my first solo independent album "Almost Crazy". I wrote many songs while I was on tour with Mink DeVille. I started touring all over Canada with my own band. Willy tried to help me get some work in New York with my own band and I stayed with Willy and Toots a few times when I visited New York. He took me around to meet some of the club owners in Manhattan. When their marriage fell apart I didn't visit them in New York any more. That was sad. I remained friends with Willy only talking on the phone maybe once a year and we would talk about what we were doing musically. I got him together with John Hammond, a great blues singer, who I played guitar for many times. In the early 1990's Willy had asked me to back him up with my band in Toronto. He wanted to play a lot of Chicago blues. Muddy Waters , Howling Wolf, Jr. Wells, Elmore James, and of course some Ben E. King. He wanted to play more slide guitar and hand held harmonica. So I opened the show with my band and then backed Willy up on the blues set. Before Willy passed away I talked to John Hammond and gave Willy his number and they got together again and Willy and I talked about him coming to do a show in Toronto, Canada again, however, he got sick and it never happened.

It's wonderful to see some of the video footage from that tour of 1982 magically emerge, after 28 years.. So much of the video footage I am seeing for the first time! It brings me and my spirit back to that whole wonderful, magical time when we were running round the streets of New York City and 29 years old! Willy was in his prime and the band looked Fantastic. Hot, tough, and romantic, like the Sharks in 'West Side Story' on dance night, and like every one of his bands was great when performing live!

Thank you for keeping his spirit alive!

Bluesfully Yours,
Paul James
Posted by Willy DeVille International Fans at 7:00 AM